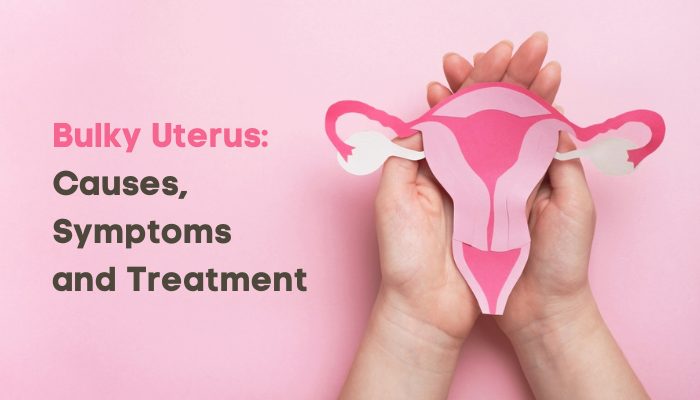 The female reproductive organ, the uterus, is small and muscular. The organ is responsible for pregnancy in women. But sometimes, due to some causes, the size of the uterus increases. This condition is known as a bulky uterus. Some people also ask that bulky uterus good or bad? This condition is hazardous. And women can get different types of diseases due to bulky uterus. However, there are some bulky uterus treatments that can help women to get rid of this issue that we will cover them below.

What is Bulky Uterus?

Moreover, a bulky uterus means a bigger uterus, affecting women’s fertility and reproductive system. In a normal condition, the uterus size is 3 to 4 inches by 2.5 inches. But in bulky uterus conditions the uterus enlarges and causes extreme pain.

Women get an enlarging uterus during pregnancy because it is a natural process. The uterus of pregnant women increases due to the fetus’s growth.

If the size of the uterus increases due to other reasons, then it is a severe case. These problems required treatment of bulky uterus on time. You will get enough knowledge about this condition below. Scroll down to learn some essential things about the bulky uterus.

What are the Different Bulky Uterus Causes?

Different factors are the causes of bulky uterus. For example, a woman can suffer from this problem due to Fibroids, Adenomyosis, Polycystic ovarian syndrome, endometrial cancer, Menopause, and Ovarian cysts are the results of bulky uterus causes.

Let’s check out these reason for bulky uterus.

However, fibroids are a prevalent bulky uterus cause. In this disease, some small tumors were found on the uterus walls. By the way, these tumors are non-cancerous. However, the size and weight of these tumors increase day by day.

Most women after the age of 50 suffer from fibroids. Studies found that 20% to 80% of women get this disease at 40 to 50. Due to fibroids, women get heavy menstruation and pain. Mostly this disease is asymptomatic. Due to this disease, women get pressure in the bladder. Thus women generally urinate continuously. The uterus size increases and provides rams and pains during periods.

Adenomyosis is another bulky uterus causes. Due to these diseases, the walls of the uterus are swollen. This condition is also cancer-free. However, most of the women get confused about fibroids and adenomyosis.

The symptoms of these two cases seem similar. But in adenomyosis, there is no tumor in the uterus. This condition is detected by ultrasound. However, in most cases, the swollen wall of the uterus looks like a tumor. Thus many people get confused about this.

Moreover, women get severe bleeding due to adenomyosis conditions. Besides this, people also feel heavy cramping during periods. Almost 20% of women suffer from adenomyosis.

It would be best if you consider the advice of a professional gynaecologist to cure it.

Pcos or Pcod refers to an ovarian disorder in which the size of the uterus increases due to polycystic ovarian syndrome. This condition results from a hormonal imbalance in women’s reproductive systems. However, endometrial shedding is also a worthy cause of polycystic ovarian syndrome; women are affected by this condition during childbearing age.

However, a woman’s body sheds the endometrial lining in the menstrual cycle. It does happen monthly. Due to this condition, women get inflammation and an enlarged uterus. Moreover, your doctor can diagnose the cause and may help you with a pcod problem solution.

However, endometrial cancer is the most severe condition of the bulky uterus. Predominantly, women from 55 to 64 suffer from this condition. Moreover, in this case, the uterus and cervix produce tumors. These tumors are very dangerous and cancerous. Due to the big size of the tumor, the uterus starts swelling. However, women get abnormal bleeding during the maturation cycle. Besides this, the women get severe sex pain and pelvic pain.

Often women get pain during urinating and feel a heavy bladder every time. Moreover, women can bleed after and before a period’s time. This condition is severe and can cause life loss.

Therefore you must take treatment for bulky uterus on time to cure it.

Ovarian cysts also enlarge the uterus size. However, in women, these cysts are filled with fluids and shown on the surface of the ovary. Therefore, these cysts are not harmful and do not create any problems. Moreover, the size of these cysts increases day by day after the increased size causes many complications in women’s reproductive system.

What are the Symptoms of Bulky Uterus?

Whenever women suffer from bulky uterus problems, they get many symptoms. Let’s understand some common bulky uterus symptoms below.

All the above bulky uterus symptoms can help you spot the disease earlier.

What are the Different Treatments to Cure Bulky Uterus?

If you get excessive bleeding and an irregular menstrual cycle, you must visit Mishka IVF center in Jaipur. In many cases, doctors remove the uterus from women’s bodies. However, some other treatments for this disease are described below.

If your uterus increases due to Adenomyosis, some drugs can cure this condition. The hormonal combined drugs can help to decrease excessive bleeding in women. If your case is very complicated, doctors often prescribe hysterectomy.

When your uterus size increases due to fibroids, you need drugs containing estrogen and progesterone. Moreover, these drugs help to reduce fibroids in the uterus. Uterine artery embolization is specially used to treat fibroids. Small particles are injected into the uterus with thin tubes in this process. Often some cases of fibroids require surgery. A particular surgery named Myomectomy helps to remove fibroids from the uterus. According to the size of the fibroids, doctors adopt the open surgery system or laparoscopic.

If your uterus enlarges due to endometrial cancer, the doctor takes bulky uterus treatment as per the size of the tumor. However, doctors also treat it as per its location and other factors. Often, doctors adopt chemotherapy and the combination of surgery and chemo to cure uterus cancer.

In summary, a bulky uterus creates many problems in your fertilization process and in bulky uterus pregnancy. As a result, you get discomfort and weakness from this disease. Thus it would help to adopt the proper bulky uterus treatment to overcome this disease. Besides this, you can use many natural ingredients to prevent this problem. Hope you get enough information about a bulky uterus through this article.

If you are experiencing an enlarged uterus, then seek emergency treatment from the experts.

Q.1 What causes an enlarged/bulky uterus?

The increasing size of the uterus can be due to various problems. Some problems like Fibroids, Adenomyosis, Polycystic ovarian syndrome, endometrial cancer, Menopause, and Ovarian cysts cause enlarged uterus. Besides this, the size of the uterus also increases due to pregnancy. But this is a natural process, and the uterus will get its average size after delivery.

Q.2 Is a bulky uterus a severe problem?

If you think a bulky uterus is good or bad, read the complete answer to solve your problem. in some cases, like menopause and an ovarian cyst, the enlarged uterus does not cause any trouble. But if you have Adenomyosis, fibroids, and endometrial cancer, then you need treatment. In these cases, you adopt quick treatment; otherwise, you may lose your life.

Q.3 How can I reduce my bulky uterus naturally?

To overcome this problem, you need a proper diet and healthy foods. Some foods rich in fiber, potassium, and dairy help prevent enlarged uterus. Besides this, reducing alcohol and smoking consumption can reduce enlarged uterus.

Moreover, you need to eat vitamin d foods such as cod liver oil, egg yolks, cheese, milk, and cereals to cure the enlarged uterus. To defeat this problem, you must avoid excessive sugar like fruit juice, potato chips, and energy bars.